is part of the EU programme  Europe for Citizens / Action 2.2: Networks of towns 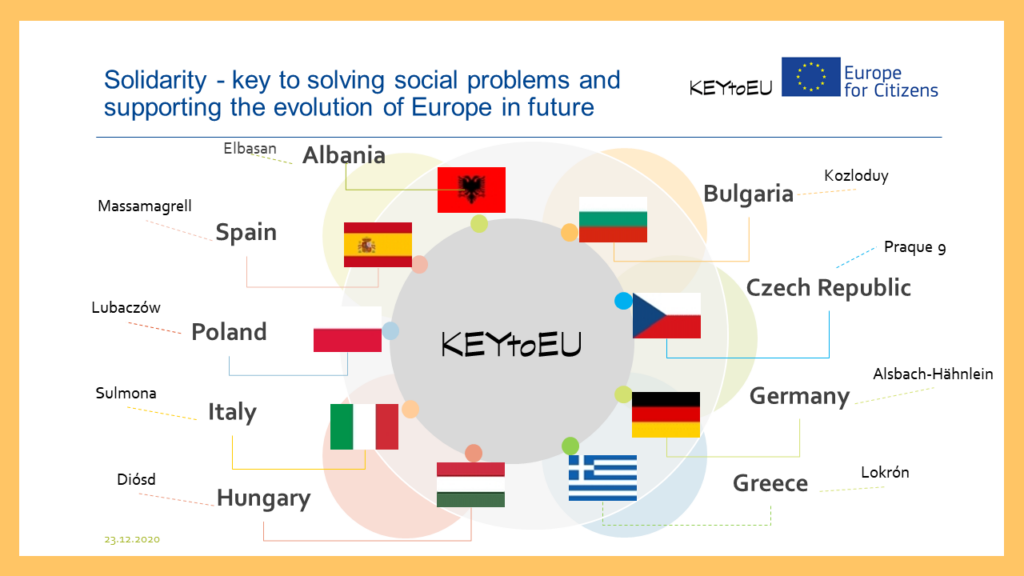 The basic idea/intention of the applicants is to apply for sources to manage a project that deals with the question of what role solidarity plays in the EU and why solidarity against the background of a common value base across all generations and all cultures interpreted and lived differently. We are particularly interested in the question of the understanding and role of the younger generation in this context. She will be given an essential place in this project.

In recent years it has been observed that in many EU Member States the number of European opponents is steadily increasing – at least in its current state. The recourse to national positions is growing. The idea that one achieves more alone than in concert with the other countries, takes over. Brexit can be considered as a current high point. From the point of view of the applicants, the EU is a project that draws on the lessons of two world wars in the last century and has been securing peace in Europe for 75 years. This was only possible because – often in tough negotiations – solutions to problems were worked out, which in the end were accepted by all in solidarity. Of course, the EU cannot rest on these achievements, it needs to be developed further. In the view of the applicants, this forward-looking task should, in particular, take over the younger generation, because it benefits the most from a Europe of solidarity.

Surprisingly, however, it can be said that young people also support European critical forces to a considerable extent and/or are not interested in Europe. It was only when Brexit was decided that many young people realized that they made it possible for them to stay away from voting on 23.06.2017.

In the event that our project application should be successful, the project will start after the European elections, the finally executed Brexit and the implementation of the new parliament and commission of the remaining 27 EU members. So many questions could be discussed against the background of these new situations. That is why we include in our project a course in Politics and Economics of the neighboring European School „Schuldorf“. With these young people – assuming a similar constellation in the other participating municipalities – we want to talk about the election result and its consequences for the European Parliament and its future role in Europe.

Why did young people elect one way or other? What expectations did you have of the election and the consequences that it would have for a solidary Europe? How is the overall social engagement of the young people to be judged under the aspect of solidarity? How do young people get involved in the social process, how do they work together with the other generations in mutual respect and with the intention of learning from each other? Which processes do you use to gain a majority for their opinion? What future do they personally see for themselves in Europe? What does the political project of the European Union mean to  them, what priorities do they set, what values do they associate with the European idea and what values and definitions could they agree upon transnationally?

Of course, as part of the project, young people should and will be able to exchange ideas with each other, in addition to dialogue between the generations. In this context, the applicant seeks to involve the youth organizations of the parties represented in the local Parliament, also the clubs, fire brigades and other youth organizations.